I could have slept all day.

A 1000ft push combined with a high energy show and four pints of Timothy Taylor’s can have that effect.

My desire to remain in my pit was compounded by the fact that my bed was big and soft and the view through the windows to the valley opposite immense.

Plus we had drizzle.

My temptation to whip the duvet over my ear and snuggle in was finally overcome and after a warm shower I pulled on my vagabond uniform and made my way down for breakfast.

We feasted on a crusty crunchy cob with home made jams all washed down with a pot of Yorkshire tea and we shared a lovely morning thank you!

Thanks you Lesley and Steve.

Later Steve very kindly whipped us to the top of Upperthong Lane to collector Dolly and after a coffee with the Lorain the Landlady and pub owner Eddy we waved goodbye to The Royal Oak and pushed uphill to our next gig, an afternoon show to be performed at Netherthong Primary.

It seemed rather odd to be be pushing a long way up hill from Upperthong to a performance at Netherthong but in true Wilkinson fashion we were rewarded at the very top with spectacular views.

From our vantage point a cute bench at the tip of Wolfstone Heights we looked down upon The Royal Oak last nights venue and deeper down into Holmfirth itself. We could see farmers in the distance working the land, small whips of smoke rising here and there, grandparents pushing their children around in buggies and the odd car making its way along far distant roads.

The early morning rain had given way as soon as we had pushed Dolly out of the pub and it wasn’t long before we were pushing down hill singing choruses of that classic Gus Elen number If It Wasn’t For The Houses In Between.

After a few miles of roller coasting roads we finally arrived at our school and were invited into the staff room for more tea and a nice sit down.

Well you have to work the pies and custard off somehow.

The gable end staff room wall featured a massive window with ever expanding views. Curiously the rain clouds had again gathered and almost the second we were inside the heavens opened and sheets of rain fell. I am begging to believe Maxims suggestion that we carry a magical umbrella that will stave off the rain as long as we have it with us

So far after nearly two weeks of vagabonding it remains unopened.

Make sure to have a look at Maxims blogs if your passing.

At the stroke of midday we were taken into the hall and treated to a school dinner. After having our fingernails inspected for any muck we were given home made beef burgers, chips n beans. I had of course been dreaming of custard. A bowl of macaroons at Laduree in Paris would be alright and everything but as nothing compared with the apple crumble and creme anglaise and Netherthong Primary.

We ate well. So well in fact that we were presented with a special badge telling us how well we had done. Barbara Cartland would be proud.

After dinner our audience gathered and we performed to the children. Telling them stories and singing songs. A lovely session that extended well after the bell and into playtime. At the end of the show many hands went up attached to curious children who wanted to know more about Dolly and our adventures. The last question was “Will you come back again sometime?” Oh yes. We will work for custard!!!

Incredibly the rain had lifted moments before and we pushed off making our way to Wooldale Community Centre for the evenings performance.

We were given a most welcome pot of tea by a lady who had recognised us from the local paper and we sat and chatted in her garden for a short while before the final push.

Arriving in the hall we set up for the show, wrote our blogs and picnicked. Perfectly on cue and once we were inside the rain began to fall.

We then performed to a small but perfectly formed audience. The festival was tonight also hosting the famous comedian Mark Thomas so our event was fringe in every way. Some people later asked is it difficult to perform to small audiences. Not at all. Us Vagabonds are as happy performing to twenty people as twenty thousand, each and every audience as welcome and precious as the next. Each show deserves and receives our utmost attention and energy and as a result audience and performers shared a fine evening together.

After the show we packed and left Dolly for the night and were whisked into town to watch some of the other festival events. We had a chat with Mr Thomas in the bar after his show and thankfully it went very well for him despite us steeling a few rows of his audience to our own performance.

Good quality bar snacks at the central venue too! An entire platter of delicious pork pies and fine selection of beers.

Holmfirth Festival know how to do it! 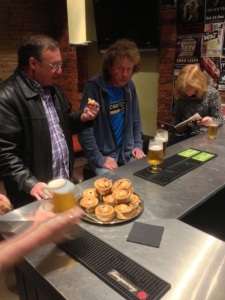 Hon on then. One for the road.

Posted in projects, Rambling On Blog