Developed in partnership with Barrow Borough Council’s Health Improvement Officer, NHS Cumbria and Cumbria Healthy Schools, “Up in Smoke” forms part of schools’ targeted approach to teaching Years 5 and 6 pupils about tobacco and gets a serious message directly to young people in a fun, accessible and educational way.

In a small laboratory, Professors Sid and Stan, bicker, banter, analyse and experiment, as they battle to understand the popularity of this rather baffling and dangerous habit. Quite aside from the fact that it kills many thousands of people every year, smoking costs lots of money and makes you stink.

This is all rather fascinating and requires further investigation.

The show features Headzup’s tried and tested trademark cabaret approach to excite and engage the audience.  Puppetry, pyrotechnics and plenty of participation combine to ensure that Up In Smoke is high energy and hilarious whilst exploring the challenging facts around the detrimental effects of smoking as Sid and Stan discover the dangers to smokers’  health, finances and ultimately the real scary stuff.

Up In Smoke lasts for 50 minutes and is designed specifically for performance in schools to Years 5 and 6. The show takes just 20 minutes to prepare and set up, with a similar amount of time to pack down and get out. There are no technical requirements, causing minimal disruption to regular school activity.

“Enjoy isn’t a strong enough word. The whole show from start to finish was excellent.”

“It was brilliant. Entertaining and kept children’s full attention for a full hour, which is never easy. The messages linked in with humour were clear.”

“It was very age appropriate to our pupils, with clear messages given, great use of visual aids.”

“Thought the use of humour was very effective; clever when combined with sudden moments of seriousness.” 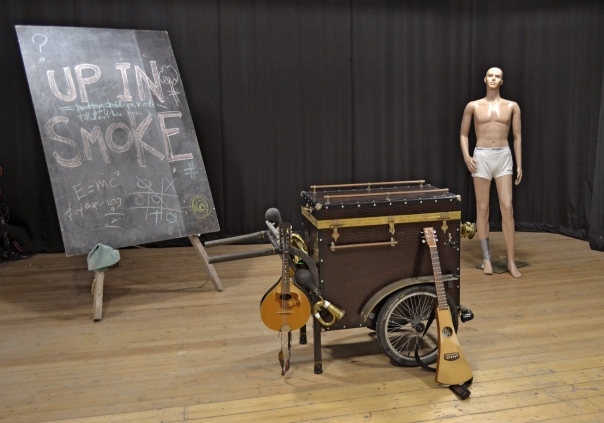 Up in Smoke was performed to more than 5,000 children in 78 schools across Cumbria between March and October 2011.  A copy of our evaluation of this work is available on request.

Further tours will take place in late 2013 and early 2014.  Watch this space for further details.

If you’re interested in bringing Up in Smoke to your area, see the Contact page for details of how to get in touch with us.

Thanks to The Ashton Group for their donation of rehearsal space to this project.