← On Top Of The World
Size Doesn’t Matter! →

Despite countless performances at festivals and events this is our very first ever tramp outside our home county of Cumbria and what a place to start.

Holmfirth is a glorious Yorkshire town which is of course the backdrop for the worlds longest running comedy program Last Of The Summer Wine.

Shortly after arriving we breakfasted in Sid’s Cafe famous the world over as the starting point for the calamitous adventures for Foggy, Compo and Clegg. 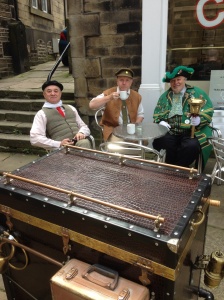 Taking on fluids and sausage gaps before another big push.

We took a press photo session to launch our week of performances and also made a short film with the town cryer to publicise this and future events for The Holmfirth Festival who are our promotors for this weeks adventures.

After coffee and a fat sausage bap it was time to move onwards ….. and upwards.

Holmfirth is beautiful and a grand example of how us humans can blend perfectly with nature. Yorkshire does this very well. Stone buildings jut and stick out at all angles along its many valleys and dales yet they all seem to fit perfectly together. Smoke curls from distant weavers cottages, dry stone walls bulge as trees and fields try to shunt their confines and reclaim the meandering roads and along the way curious folk stop and enquire “What’s in the box lads?”

After our photo call we pushed our Dolly up the sharp rise that leads to the foot of Upperthong Lane. Here we were introduced to the lovely people who are very kindly hosting us for the duration of the festival. Lesley and Steve Sykes are friends of the Holmfirth Festival and have a beautiful house with sweeping views of the valley. We enjoyed coffee with them in their garden before unloading our personals and looking up the mount towards Upperthong itself.

Our goal The Royal Oak a pub standing 1000ft above us and the venue for tonight’s performance.

Having already conquered the mighty Irton Pike a few weeks earlier we were confident in our ability to tramp to the top and so began another shunt.

The hill was long with steep angles flanked by pretty cottages and large ex mill owners houses. Also new estate designed sympathetically to merge into the landscape. Soon enough we were joined by various school kids also trudging slowly home after a day of lessons.

We have but one rule that ensures we will always make it to the top. Take your time. As long as we stop before we need to then surely we will alway prevail and eventually arrive.

We stopped many times. Once outside the local church where met two blokes visiting from New Zealand who had traveled from a family holiday in Wales to visit the locations featured in The television comedy. We didn’t know but we had just walked past the resting place of Bill Owen. A fellow showman and star of the show.

Later we paused for another breather and were offered cold drinks by a family arriving home from work. We drank, chatted and soon enough we were joined by neighbours all keen to know what was in our box.

We handed everybody in the growing group a festival brochure, thanked our pit crew and invited them to join us at the evenings show.

Arriving at The Royal Oak was a joy.

A vibrant pub well supported by the locals many of which were sat in the sunshine enjoying pre dinner drinks. Our landlady Lorraine welcomed us with icy chilled lemonade and showed us around. We set our Dolly out in front of the fire and as the Royal is a wet pub were driven off to another nearby pub for a meal. 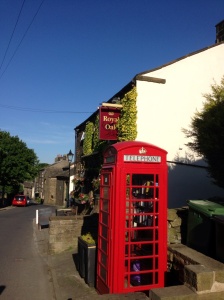 What’s great pub! Can’t wait to visit again. If you do visit ask the landlady to do the trick with the maltezer.

Our audience gathered and before long the pub was packed. Eventually we had standing room only. We were overjoyed that most of the people we had met on the push uphill had arrived to see the show and our audience had a lovely mix of regulars, local families, festival goers and fellow professionals who live in Yorkshire who had traveled to view. Street theatre artists, puppeteers and musicians were all present and our show was very well received. Our applause at the end rang for an overwhelmingly long time and later as we packed down we spent a good few hours in fine company with a few pints of Landlord.

Two things stand out for me.

One was the moment I realised I was about to display my marionette manipulation in front of one of the country’s finest puppeteers. (Who later told me I had a done a fine job Phew!) But the winning moment was shortly into the second half. A group of drinkers arrived during our interval and as they had not been present during the first set were laughing and bantering at the far end of the bar. However Maxim swiftly wooed them with one of our more intermit routines and before long you could hear a pin drop and we held the audience until the end.

Three things actually. If you do find yourself in Upperthong at the Royal Oak ask the landlady to show you her trick with the maltezer. 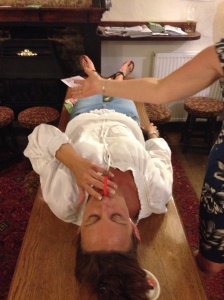 I have no caption for this. Best experienced live!

Later still we were given a lift back down to our house courtesy of Smiley Smacko a local Pierrot clown and his fiancé Lounging Lynda, where I quickly fell into bed satisfied with a fine days vagabonding.

This was another practically perfect day in yet more glorious sunshine. Thank you to everybody who walked a 1000ft to see our show.

← On Top Of The World
Size Doesn’t Matter! →